The congregation was founded as the Church of the Messiah, on December 13, 1864. The Meeting House, designed by Thomas Silloway (a Boston architect and Universalist minister who designed the Vermont State House in 1859) was dedicated on January 25, 1866. The Washington County Gazatteer for 1873 – 1889 included a brief history of the church and a handsome sketch, indicating that it was “popularly known as The Unitarian Church.”

There had been an earlier Universalist society and a Liberal Christian society in Montpelier beginning in the 1820s, which had not thrived. In 1864, Rev. Charles Allen, a Unitarian minister visiting Stowe, Vermont, came as a “missionary” to Montpelier and discerned active interest in the creation of a new church. Although there were more Universalists involved than those of other persuasions (such as “orthodox” and spiritualists), they chose to become a Unitarian congregation. Dorman Kent’s 1933 church history provides Charles Allen’s thoughtful insights on the decision.

Ministers in the Congregation’s History

Events in the Congregation’s History

The church has survived major natural disasters: the epic New England Flood of 1927 and Montpelier’s 1992 flood, suffering significant water damage. With hard work by members and friends, it came through each stronger.

In May 1979, the congregation voted to change its name to the Unitarian Church of Montpelier (UCM), a decision acknowledging that the expressly Christian name did not accurately reflect the broader range of the congregation’s religious views.

Two UCM Members were ceremonially joined in the first civil union performed at the church in 2000, the year the Vermont legislature passed the civil union law. 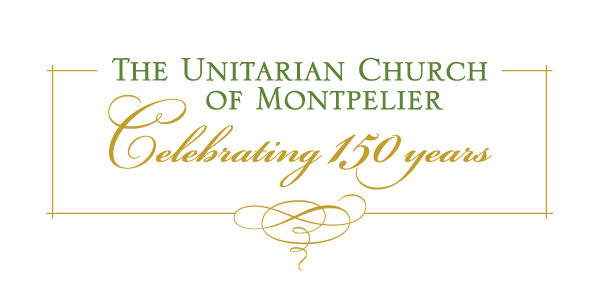 The church’s 150th anniversary celebration took place between December 2014 and January 2016. The 150th Committee planned a series of events to commemorate the history of our church in the community and the dedication of the church in January 1886. UCM hosted The Vermont Humanities Council program The Vermont Civil War Songbook which featured songs and letters from the Vermont Civil War era, performed by Linda Radtke and Arthur Zorn. Rebecca Noel, Associate Professor of History at Plymouth State University, spoke about the Perilous Boyhood of J. Edward Wright, our minister from 1869-1909.

In early 1865, the Montpelier Independent Meeting House Society (MIMHS) was formed as a separate corporation. Its membership overlapped significantly with those who had formed the Church of the Messiah. MIMHS’s legal responsibility was to arrange for the design, financing, construction, and maintenance of the church. It ceased to exist through an act of the legislature in 1902, having done its work well.

In 1898, the organ was moved from its original placement at the rear of the sanctuary to a newly-built space behind the chancel. On the first floor below the organ, the kitchen was built.

In 1983, the church’s first bell (Thomas Silloway designed a belfry) was installed. It arrived through the hard work and generosity of a UCM member, who purchased and brought the 1908, 450-lb. bell from a New Bedford, Massachusetts Catholic church. Children ring it every Sunday before church.

The sanctuary was completely renovated in 1998-99, and a major steeple restoration was completed in 2000. The original organ, a Stevens Tracker, was restored significantly in the late 1990s and early 2000s.

In 2012, after approval by the Montpelier Design Review Committee and a vote of the congregation, the church was painted in a combination of white trim and walls of what may be called sage. It had been painted all white for over 80 years. The color combination offers an appreciation of the architectural details of Thomas Silloway’s Renaissance Revival design.

In the fall of 2014, the steeple was painted to match the new colors. Three original architectural features of the steeple were faithfully replicated by Southgate Steeplejacks, who had done the 2000 project. The work was made possible, in part, with a generous $15,000 grant from the Montpelier Heritage Group.

The church has an Accessibility Task Force, which is wrestling well with both physical and programmatic accessibility in our 150 year-old building, and the church regularly receives the Green Sanctuary designation from the Unitarian Universalist Association, thanks in large part to the efforts of our active Climate Action Team (CAT).

UCM was first recognized by the Unitarian Universalist Association (UUA) in 2013 as a “Welcoming Congregation.” The designation was and continues to be an acknowledgment of several years’ work and an ongoing commitment to welcome members of the lesbian, gay, bisexual, transgender, and queer communities.