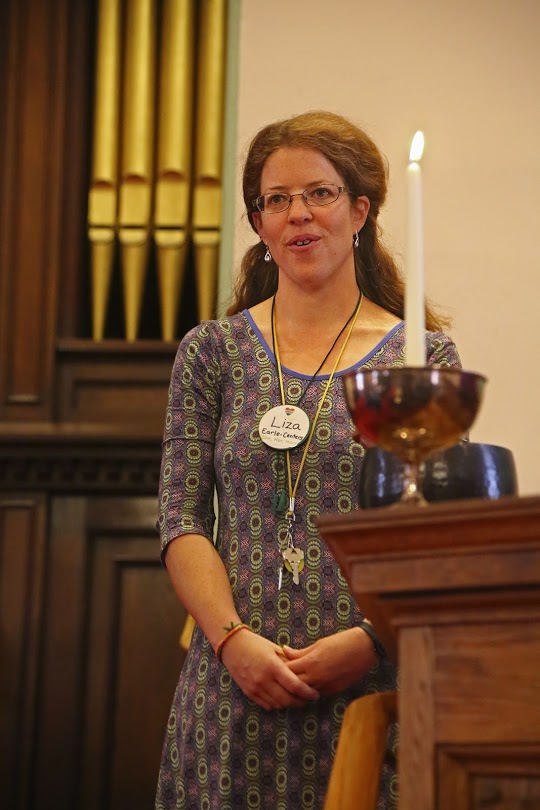 **Liza will be on leave for the months of January & February 2022. You can read a letter from Liza about her leave time here.**

Liza Earle-Centers joined the UCM staff as Acting Dir. of Religious Education in August 2016.  She is thrilled and honored to continue at UCM by filling the position that emerged out of the RE Envisioning Process.  She currently serves the role of Director of Lifespan Spiritual Exploration (LSE).

Originally from Richmond, VT, Liza finds spiritual inspiration through nature and the many religious traditions of the world. While at Mt. Holyoke College, Liza began attending UU services in Northampton, MA along with activities at the interfaith center on campus.

After college, Liza’s compass led her westward as an outdoor educator at Foothill Horizons Outdoor School in Sonora, CA. Most of the students were from cities, and for them that one week in nature was a week of awe and self-discovery. During her four years there she gained profound respect for the Chinese proverb, “Tell me, I’ll forget. Show me, I may remember. But involve me, and I’ll understand.”

Eventually Liza returned to Vermont, after a detour in Bolivia and Peru. She has since led high school students on trips to Latin America, including a multi-generational service trip with Planting Hope in 2014.

Back in the Green Mountains, Liza spent four years teaching 5th and 6th graders at Calais Elementary. Most recently Liza has been at home for her daughter’s early years, while teaching K-2nd graders part-time, with the North Branch Nature Center’s ECO program. Liza and her husband, Lincoln, live in Montpelier with her step-sons, Milo and Cadence, and daughter, Marissa.

Liza grew up going to a church where she was moved by the music but rarely understood the sermon. She’s honored to have this opportunity as UCM staff—alongside the LSE committee, the volunteer facilitators/teachers, and the congregation as a whole–to make the mission and ideas of our Unitarian Universalist tradition accessible for all ages.  Liza’s happy to meet with anyone new to the church about opportunities to engage in our spiritual exploration program, whatever your age–infants on up through elders!