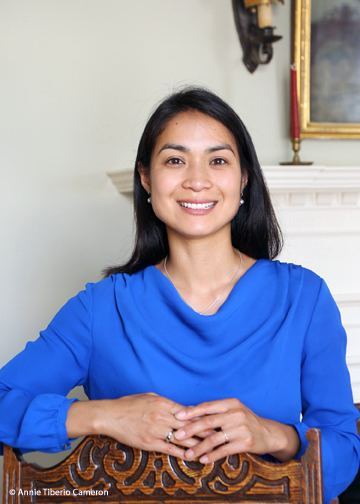 The Reverend Joan Javier-Duval began her ministry at the Unitarian Church of Montpelier (UCM) in August 2015. She previously served as the Intern Minister and then Consulting Minister of the Unitarian Society of Germantown in Philadelphia, PA, and as a student chaplain at Advocate Lutheran General Hospital in Park Ridge, IL. She has also served as a Guest Preacher at over a dozen congregations in Vermont and greater New England. Rev. Joan was installed as the settled minister of UCM on Sunday, April 3, 2016.

Before responding to her call to ministry, Rev. Joan followed a call to public service as a community and political organizer and nonprofit leader. Joan organized young voters in New Mexico, fought for workers’ rights in Boston, MA, and trained progressive political leaders in Washington, DC. She also volunteered her time serving the Asian American community as an advocate for women’s rights and immigrant and worker justice. In these contexts and through her ministerial training, Rev. Joan developed her passion and dedication to social and economic justice, anti-racism and anti-oppression, and creating Beloved Community.

She was born and raised in Chicago, IL, the daughter of immigrants from the Philippines. She is a 2003 graduate of Swarthmore College in Swarthmore, PA and earned her Master of Divinity degree in 2012 from Yale Divinity School in New Haven, CT.

Rev. Joan has served on the Steering Committee of the Asian Pacific Islander Caucus of Diverse Revolutionary UU Multicultural Ministries (DRUUMM) and currently serves on the Nominating Committee of the Northern New England Chapter of the UU Ministers Association (UUMA). Joan is also a member of the board of Vermont Interfaith Action and is one of the tri-chairs of the Vermont Poor People’s Campaign.

She recently had the honor of leading the Sunday morning worship service for the UUA Virtual General Assembly in 2020.

Rev. Joan and her family have lived in Montpelier since August 2014. Together, they enjoy hiking the area’s beautiful trails, eating delicious local food, and finding adventures in day to day life. Joan also enjoys yoga, running, photography, and time in the garden.

Joan is available to meet on Tuesdays, Wednesdays, and Fridays by appointment.