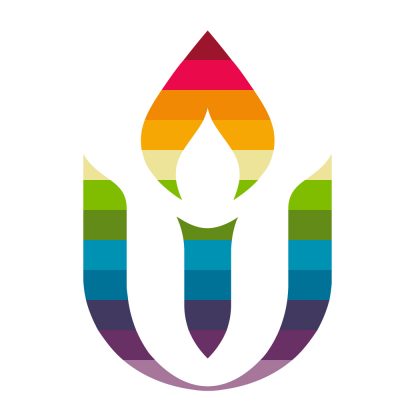 When I moved to Central Vermont in 2017 from Salt Lake City, Utah, everything I encountered seemed smaller than it had been ‘out west’ … the roads, the businesses, the people, the cars, the houses, even the serving sizes of food at restaurants … until I walked inside the Unitarian Church of Montpelier.
Not only was this building about twice the size of our little Unitarian Church of Salt Lake City — there were just so, so many of you! So many hundreds of Unitarian Universalists — active, engaged, kind, and compassionately working day in and day out to make your world around you a better place … I knew right away I’d found my people, my religious home. In Salt Lake City, perhaps 90% or more of our congregants identified themselves as ‘Ex-Mormon,’ ‘Atheist,’ ‘Agnostic,’ or ‘Humanist.’ There were a few who came from ‘elsewhere,’ who may have been raised UU, Catholic, Protestant, Jewish, Buddhist, Hindu, or Muslim … but when I say ‘a few,’ I really do mean about three, that I ever met!
Here at UCM, comparatively, there are so many more of you who identify as UU Jews, UU Quakers, UU Buddhists, UU Christians, and UU Humanists … there are people here from Catholic, Methodist, Lutheran, Congregationalist, and Episcopalian backgrounds, and even, astonishingly, people who have been raised in families who have been UU, Unitarian, or Universalist for many generations past. Our stories are incredibly varied and diverse — and the questions you ask and the answers you seek continually amaze and inspire.
When the time came, then, that Spring, when I was invited to make a pledge as a new UCM Member, I sat down with my finances and asked myself some serious questions – about this community, and all the work I had watched you accomplishing in just the first few months I’d been attending – and about myself, and how deeply I wanted to be a part of all of this. I saw the opportunities that were here, for engagement, friendship, and community building, long before I was hired as the part-time Membership Coordinator, just this past September. I saw the people like Art, Judith, Dave, Linda, Pam, Sue, Collin, Abby, and Barbara – whose smiles lit up the Vestry, and whose hugs welcomed me back, every time I returned for a service or coffee hour. I saw the people like Joan, Liza, Dick, Bill, Eliza, Sam, and Becky, who worked here, mostly part-time, yet gave so, so deeply from their hearts and souls to keep this place up and running. I began meeting stalwart volunteers like Janet, MaryAnn, Paul, Sally, and Peter, and choir members who became fast friends like Fran, Donia, and Susan, and I knew that this was a place I wanted to be – to just be – indefinitely.
Monetary value can’t be placed on people, really, but that’s what UCM is to me – all of you, the people. So when I pledged last year, I tripled my giving over any amount I’d ever felt able to give when I was living in Utah. I truly did love my community there, too … but … they were small. They were tight-knit, comfortable, and not really growing. They were loving, but not quite as welcoming, or active in their broader community, as they could have been. I did adore them, and I felt at home enough there to sign the Membership Book in 2010, but this was primarily because I deeply connected with the 7 Principles of Unitarian Universalism, and wanted to contribute in every way I could to knowing that the First Unitarian Church of Salt Lake City would continue being a bastion of liberal religious community in Utah for many years to come.
When I think of what I loved about my UU community in Salt Lake, I realize that, though I loved many things about being a Member there, here at the Unitarian Church of Montpelier, I find every day – not just on Sundays – that I’m deeply inspired by you. I’ve been inspired to give more, here at UCM, because I find myself able to be more, with you, and to want to do more, to change and challenge myself and our world.
Every dollar I give here, doesn’t ‘just’ provide coffee for our own Coffee Hours – though, gratefully, our donations do that! – each dollar also goes out of our doors, into the broader Montpelier community, and the broader Vermont community, making possible concerts, lectures, and events that educate & inspire so many hundreds more people, even, than the hundreds that come through our doors on a regular basis. At the Vermont Historical Society, the Kellogg-Hubbard Library, the Hunger Mountain Co-op, and many other local non-profits and small businesses, I find UCM members and friends attending and organizing events co-hosted by our Committees and active volunteers.
Every gift I’m able to give to UCM, of my time or my financial resources, doesn’t ‘just’ provide Lifespan Spiritual Exploration opportunities for myself and fellow congregants of all ages — though, amazingly, they do that! – they also go out, into our broader community, to feed, clothe, and house our own hungry, cold, and at-risk neighbors, people we all genuinely care for, through our Monday Community Lunch, regular donations to the Montpelier Food Pantry, at our Thursday Night Warming Shelter, and in so many other countless ways.
Thank you, for inspiring me to give more … and also, thank you, for giving me more than I ever expected to receive here, by hiring me to be UCM’s first Membership Coordinator. I’m honored every time I walk through our doors, that you are all so generous, and that you have all given me this gift, of the opportunity to be a part of building our loving community.
Gratefully,
Elaine Stehel – UCM Membership Coordinator