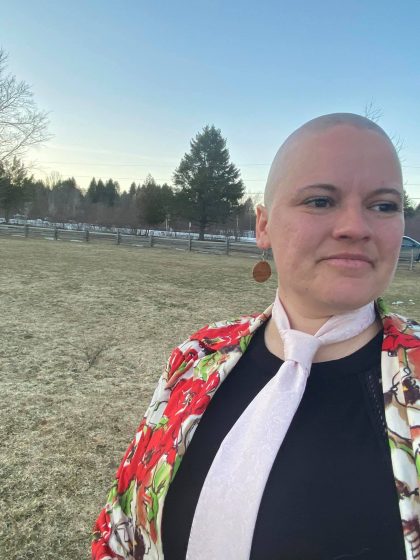 Elaine Ball became a member of the Unitarian Church of Montpelier in 2017, transferring her membership from First Unitarian Church of Salt Lake City in Utah, shortly following her cross-country move to Central Vermont. She is thrilled to have been given the opportunity, since 2018, to work alongside UCM staff and volunteers as Congregational Life Coordinator.

Elaine was raised as a member of the Church of Jesus Christ of Latter-Day Saints. Having been ‘named’ and ‘blessed’ by her parents shortly after birth, and ‘baptized’ at the age of eight, then following receipt of her first ‘temple recommend’ at the age of 12, and eventually being ‘Endowed,’ ‘Married,’ and ‘Sealed for Time and All Eternity’ in various LDS Temples by the age of 20 … for someone who wasn’t raised knowing that ‘membership’ in any faith/religion could actually be a choice, her younger self would certainly have looked rather askance at her current profession here!

She officially resigned her membership from the LDS/Mormon religion at the age of 21, after coming out to herself, family, and friends as Non-Mormon, Polyamorous, Humanist, Atheist, and Bisexual. In her turbulent twenties, Elaine began working and volunteering in myriad capacities: as a community organizer; political activist and campaign volunteer; non-profit event planner; and AmeriCorps Alumna. Throughout her adolescence and young adulthood, she studied, worked, and volunteered in various roles in College and University Writing Centers, Public Libraries, and Public and Private Schools — from French student to ESL teacher, tutor to peer writing instructor, group facilitator to volunteer manager, dungeon master to hiking partner.

Elaine co-founded and led a chapter of the Secular Student Alliance at the University of Utah from approximately 2008 – 2012, and was serving as the Vice President of the Humanists of Utah before moving to Vermont. She officially joined FUSLC in May, 2010 and has since continued to immerse herself in learning more and more about buddhist, humanist, Unitarian Universalist, and all other philosophy, psychology, science, and theology from throughout history, space, and time.

In addition to her part-time work with the Communications Team and Membership & Hospitality Committee here at UCM, Elaine works part-time as a Peer Support Specialist at Another Way, assisting psychiatric survivors with individualized employment placement and support. She is also a private Beginning French teacher; child-care provider; and home, pet, car, and plant/garden care-giver for traveling families throughout Central Vermont. Elaine volunteers when she can for causes near and dear to her heart, serving on the JEDI (Justice, Equity, Diversity, Inclusion) sub-committee of the Hunger Mountain Co-op Council; as the Communications Press Secretary for the Washington County Democrats; and on the Fundraising Committee of the Vermont Democrats. She recently moved to Montpelier with her beloved cat, Colonel Pendleton.